What better reason to break a long silence than to ramble endlessly about my favorite event of the year: Les Grandes Medievales d'Andilly? This French Ren Faire has been going strong for 19 years.. and I have been a fan since early days.  I first went in 1998, when it was a tiny event held in the heart of a tiny village.
These days, it is the biggest one in France.  Over the five days of the most recent festival, there were 57,000 people attending! And there was a new record set on May 24: 18,000 people in a single day!


And I am happy to say that my family is part of what makes the event fun!
Ever since 2010, I get together a group of my pals from the Music Conservatory and we perform Renaissance music. It started out very casual, but now we have great costumes and a big repertoire of songs.
And of course, my kids are there, looking gorgeous and  doing various cool things like sword fighting, calligraphy, embroidery and music.

There was also a great innovation this year, we have our own camp!
We are now officially "La Compagnie de La Rose Anglaise"!


Coming soon: Photos of our music performances at the event.

Somehow, the jaunty "See you tomorrow" of my last post turned out to be laughably overly-optimistic.

But here I am again, ready to give it another go. My computer, counter to all predictions, is still running.  It is wheezing and coughing like a two pack a day smoker, but still running.  So there's that.

What's new?
Quite a huge lot of things.....
Severin is at the University of Grenoble.
Valentine is in her second year at the Fine Arts school in Avignon.

And the twins are hard at work (as I am!) on their costumes for the upcoming Polymanga Con in Switzerland.
Only one week to go and this Game of Thrones cosplay needs to be DONE!
Mallory's Danaerys  outfit is nearly done.  She is hot glue gunning scales to a dragon egg as we speak.
And I am really supposed to be downstairs right now, cutting out the bodice for Alexa's Margaery Tyrell dress.

I will try to post again soon with photos....but no promises. 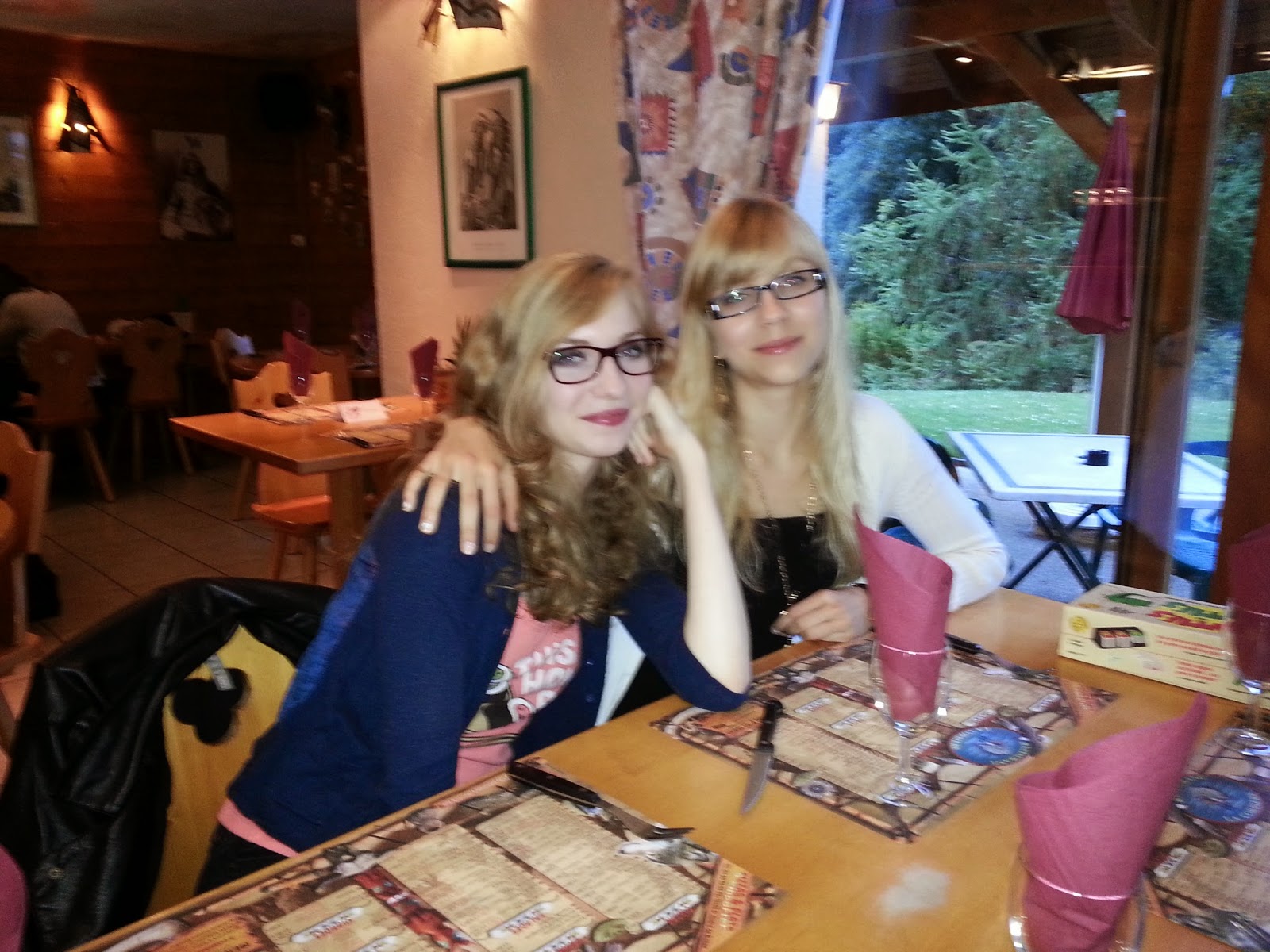 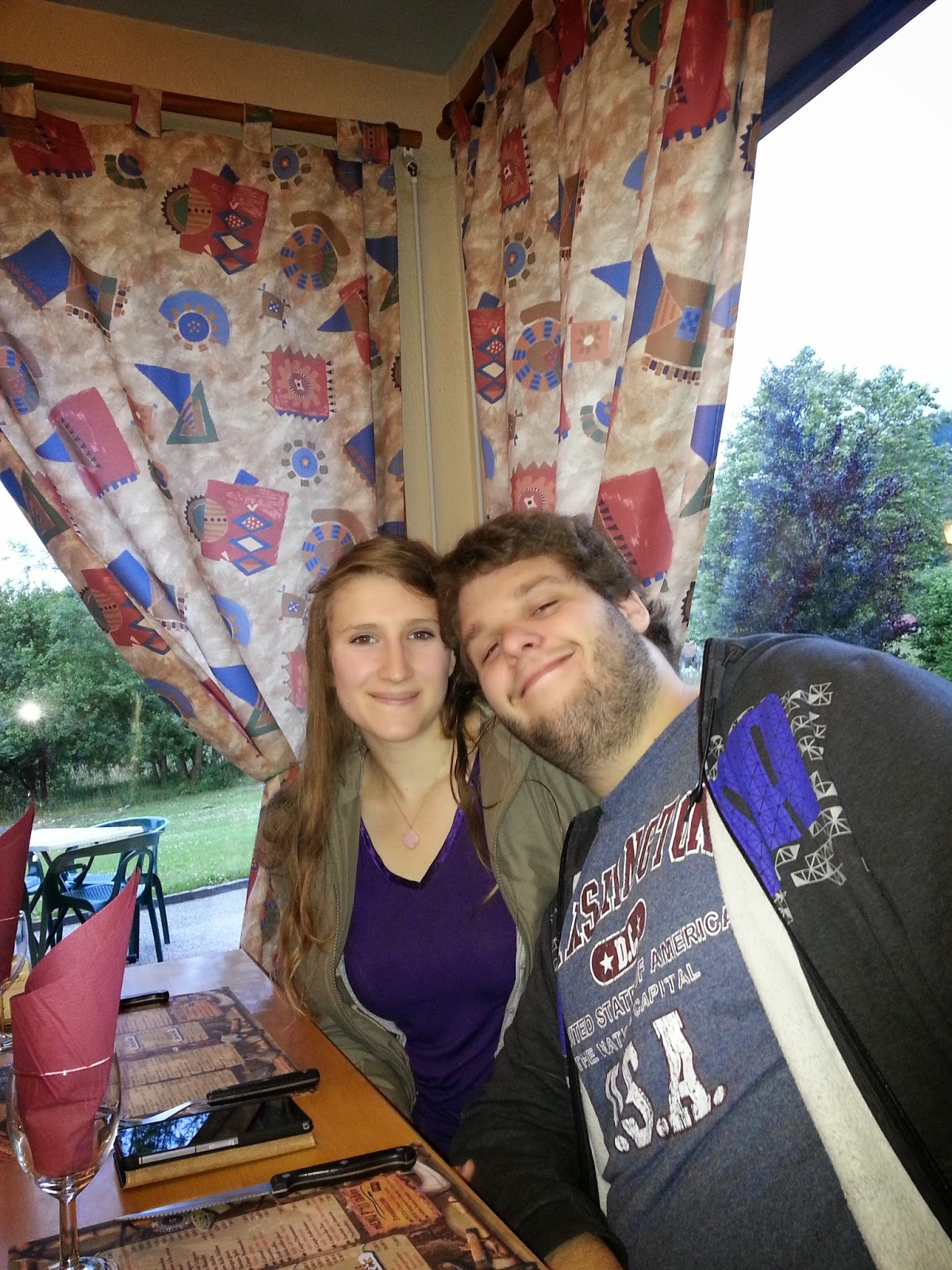 My computer is eight years old and has decided that it is time to retire. Maybe move to Florida and play some golf.
I have been slow to accept her decision to move on to a new life of bingo, scrabble tournements or whatever the heck old computers do when they leave their working days behind them. 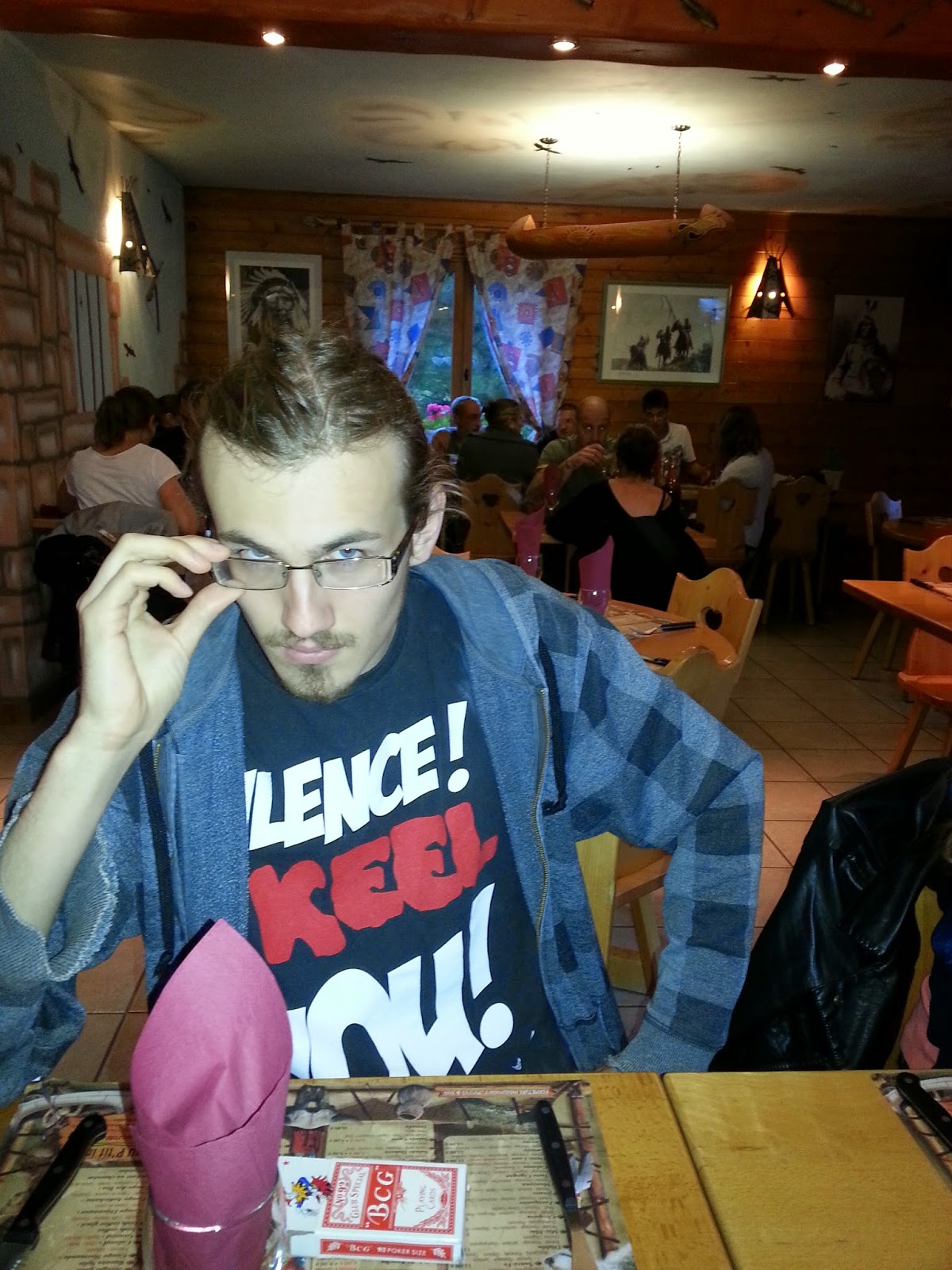 At any rate...here I am, desperately trying to blog on a smartphone keyboard that is the size of a postage stamp.
I have kept this blog going, more or less, since 2006. It seems like a shame to let it die just because Facebook and a dodgy computer seem to be telling me to give up.
There's lots to show and tell.
See you tomorrow?

All Shower, All The Time. 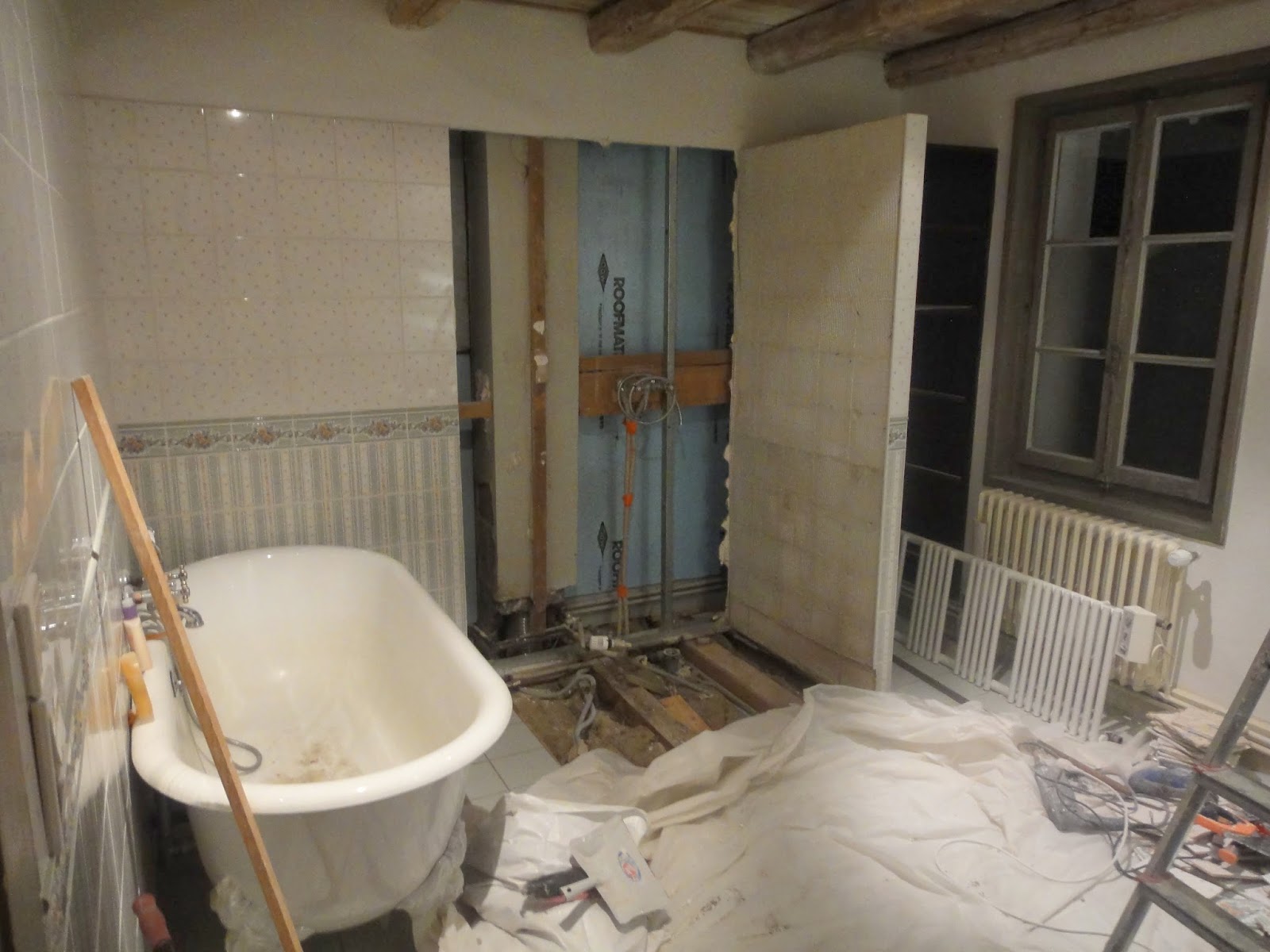 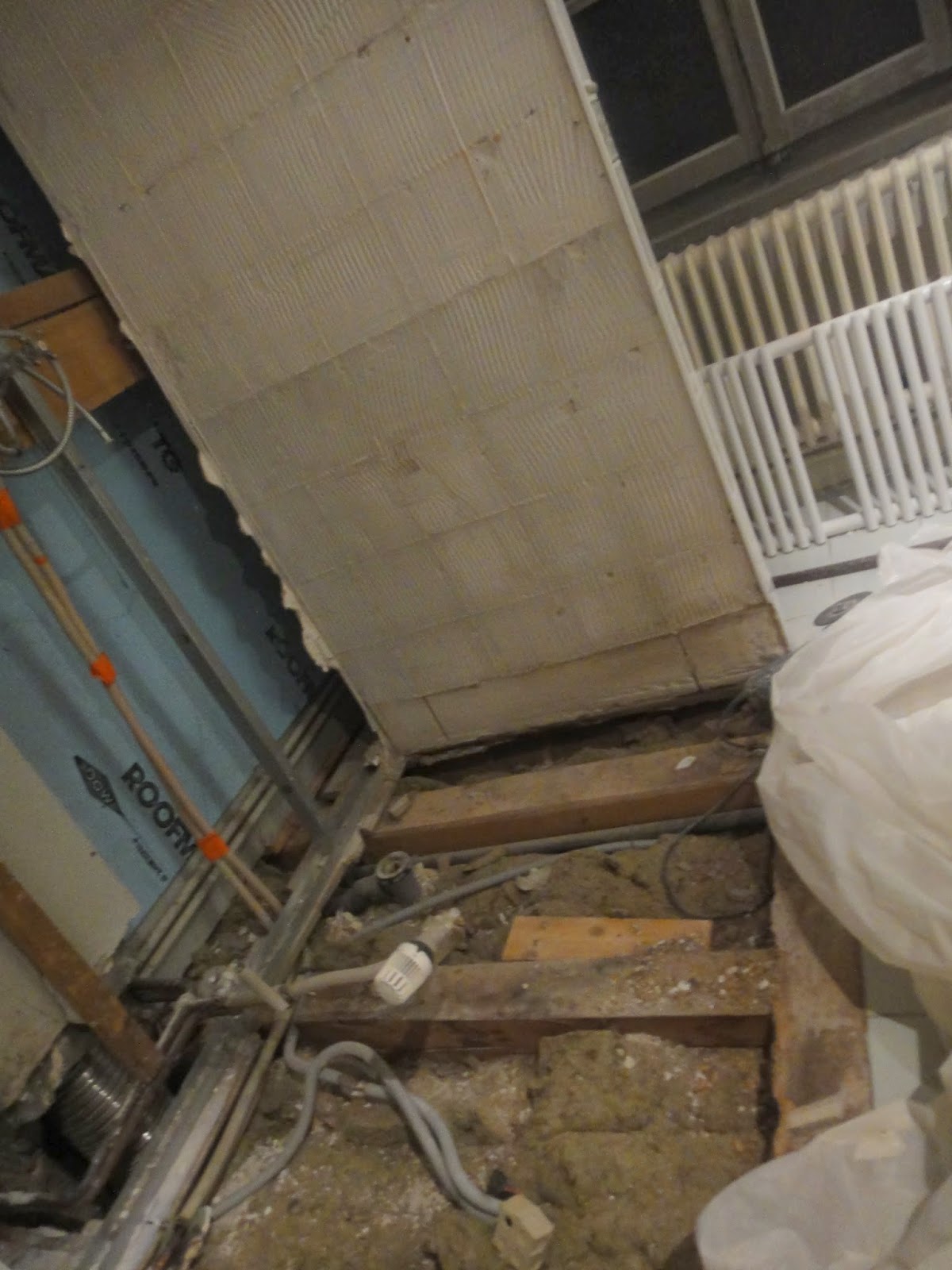 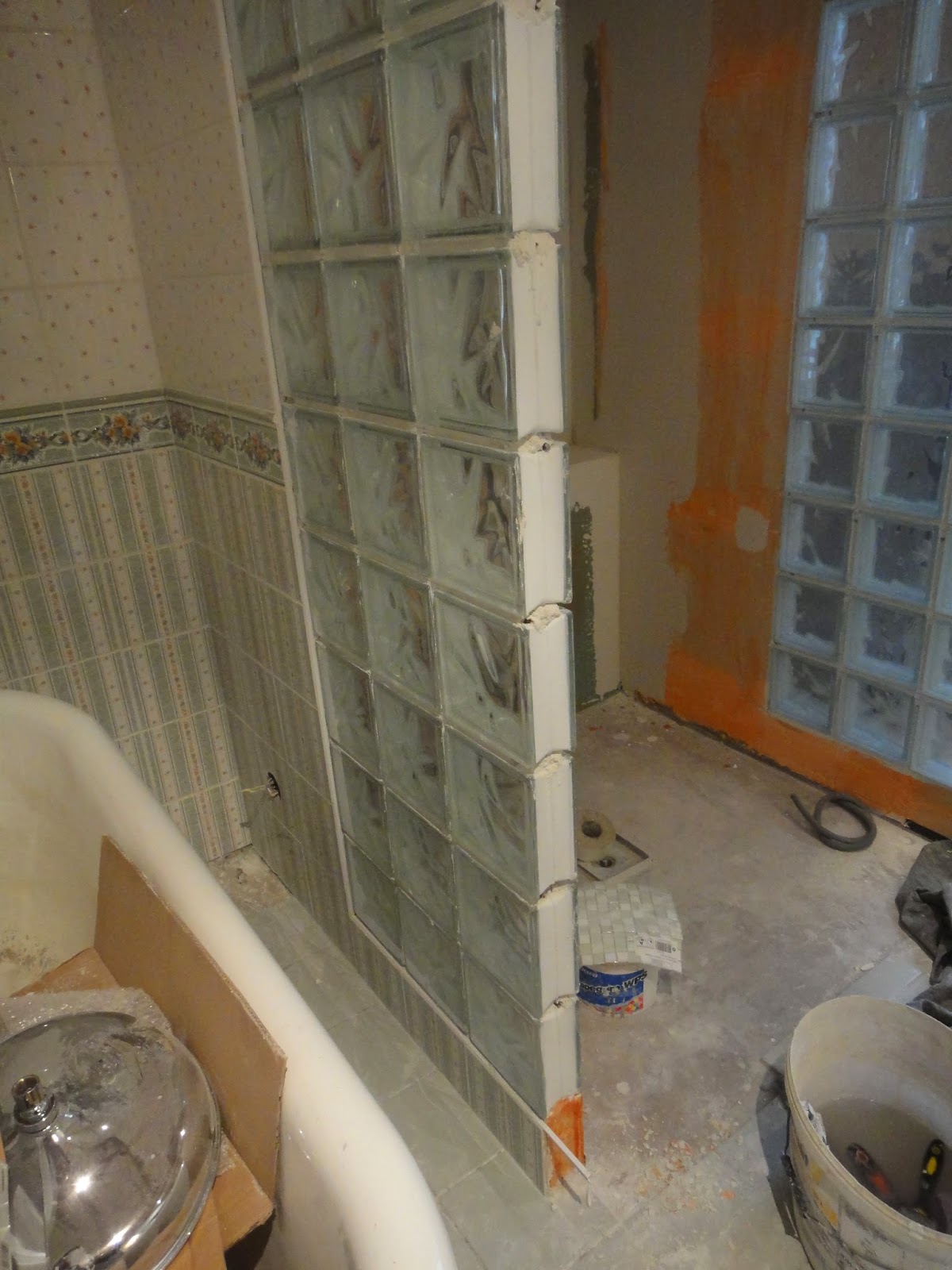 After too many mishaps to tell of in this modest blog, we are finally DONE with the last big remodelling project chez nous!

The shower in the kids' bathroom was looking shabby, so we decided that after the guest room and bathroom were done, we'd "freshen up" their shower.

But it turned out to be...quite substantial once the walls started to go up.

The Lion, the Witch and the Guest Bedroom with Full Bath. 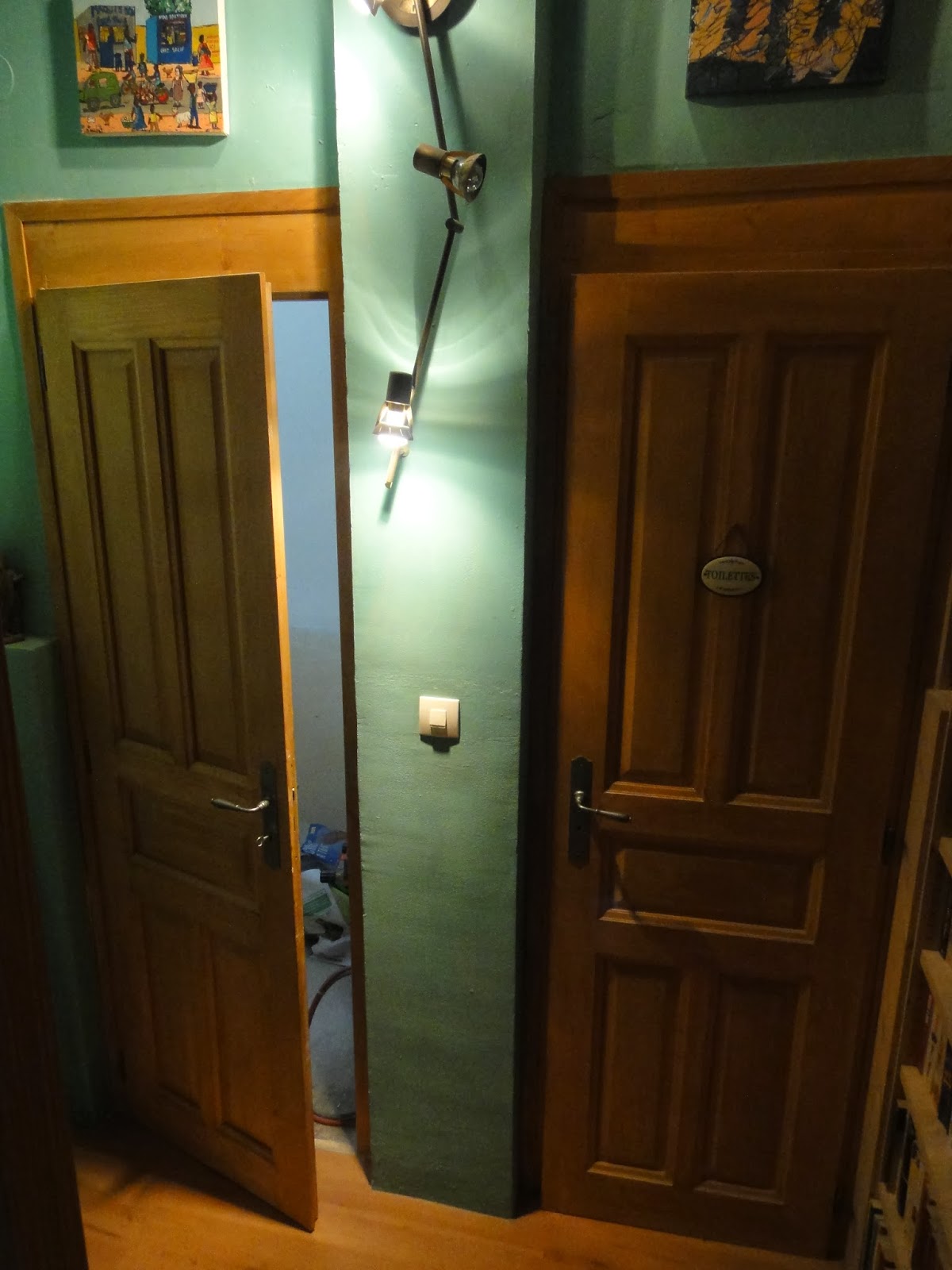 The door on the left?
It used to be a closet.
But now when you open it, instead of finding assorted winter coats and snowboots, you end up in a magical land where it is winter all year round because of the terrible Snow Queen.

Well......it would be nice if that were true, because last time I checked, having an imaginary country located  in one's home did NOT involve a month of unholy messes and daily numerous trips to the DIY shop....not to mention actual  painting, tiling, and general hard work.

As you may have gathered from the above, our project is NOT done yet.  Still at least a week to go. 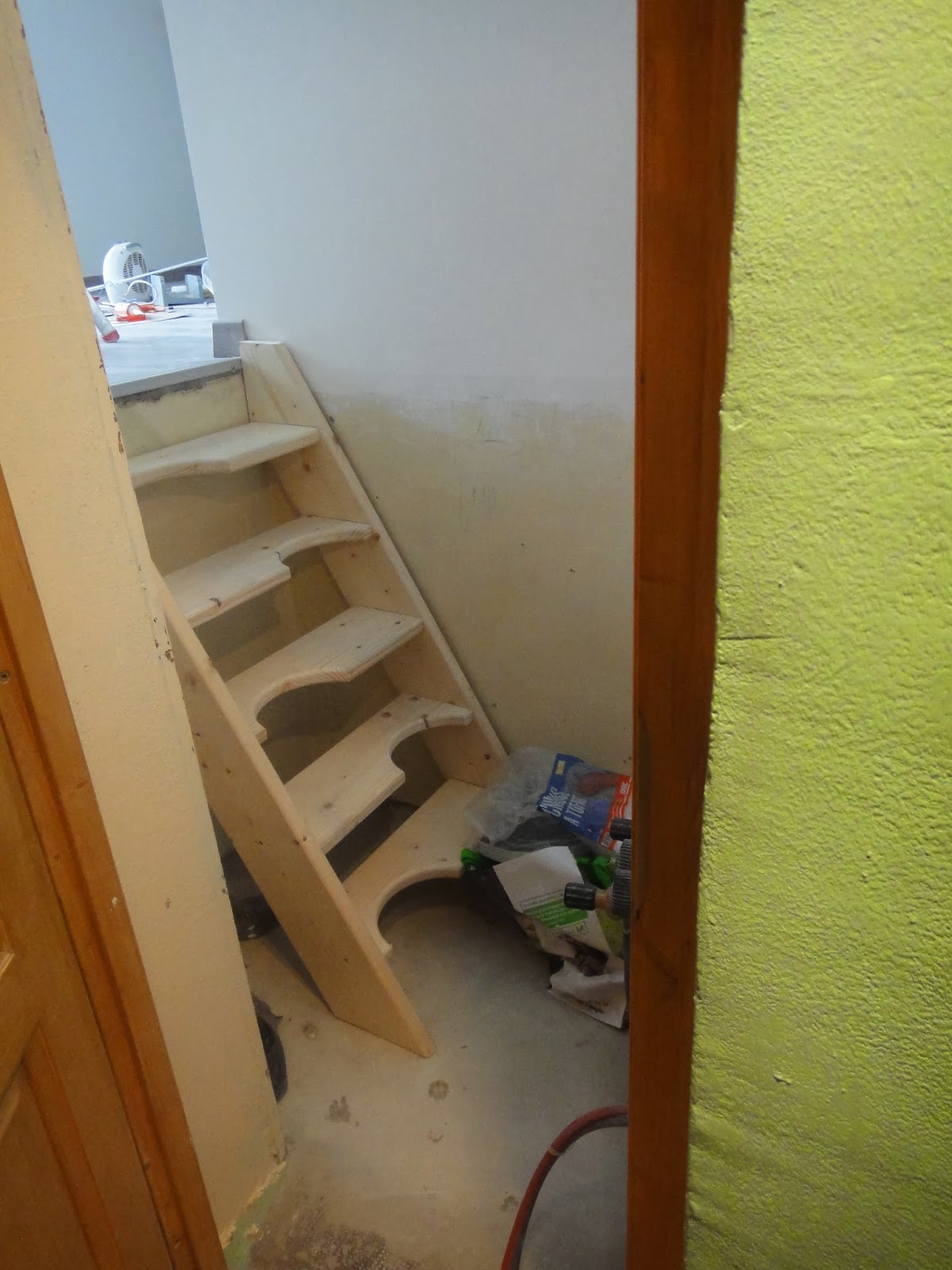 The stairs have been temporarily put in, making it a lot easier to get in and out.
And  fitting a staircase of any kind into a closet was no mean feat. We had to get special, rather steep ones. 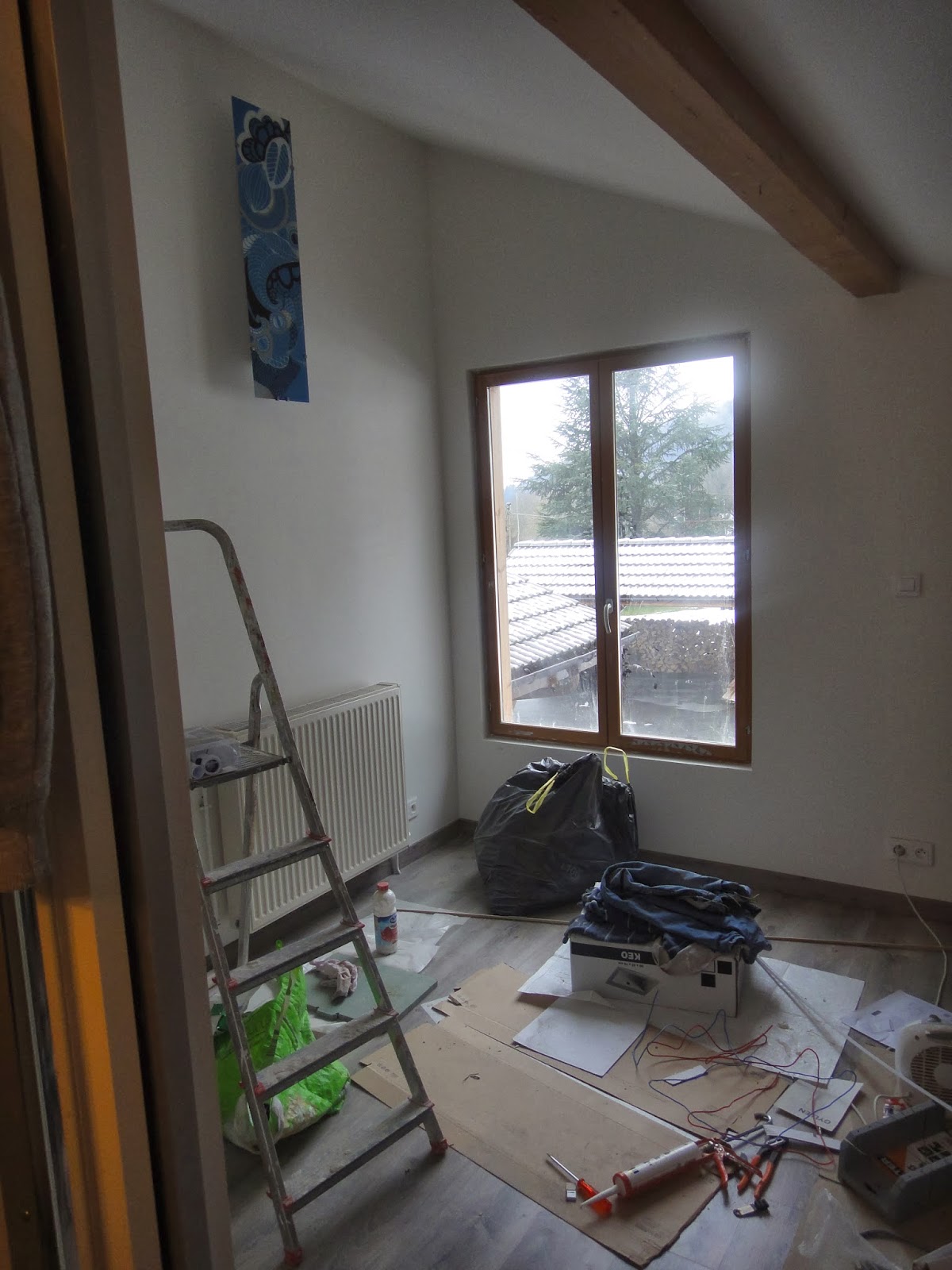 The room is finally painted and the stratified  flooring ("Celtic Oak") is in.

The light fixtures we chose at Ikea are also up.
There are two, though you can't see the second one in this pic.
Very groovy. 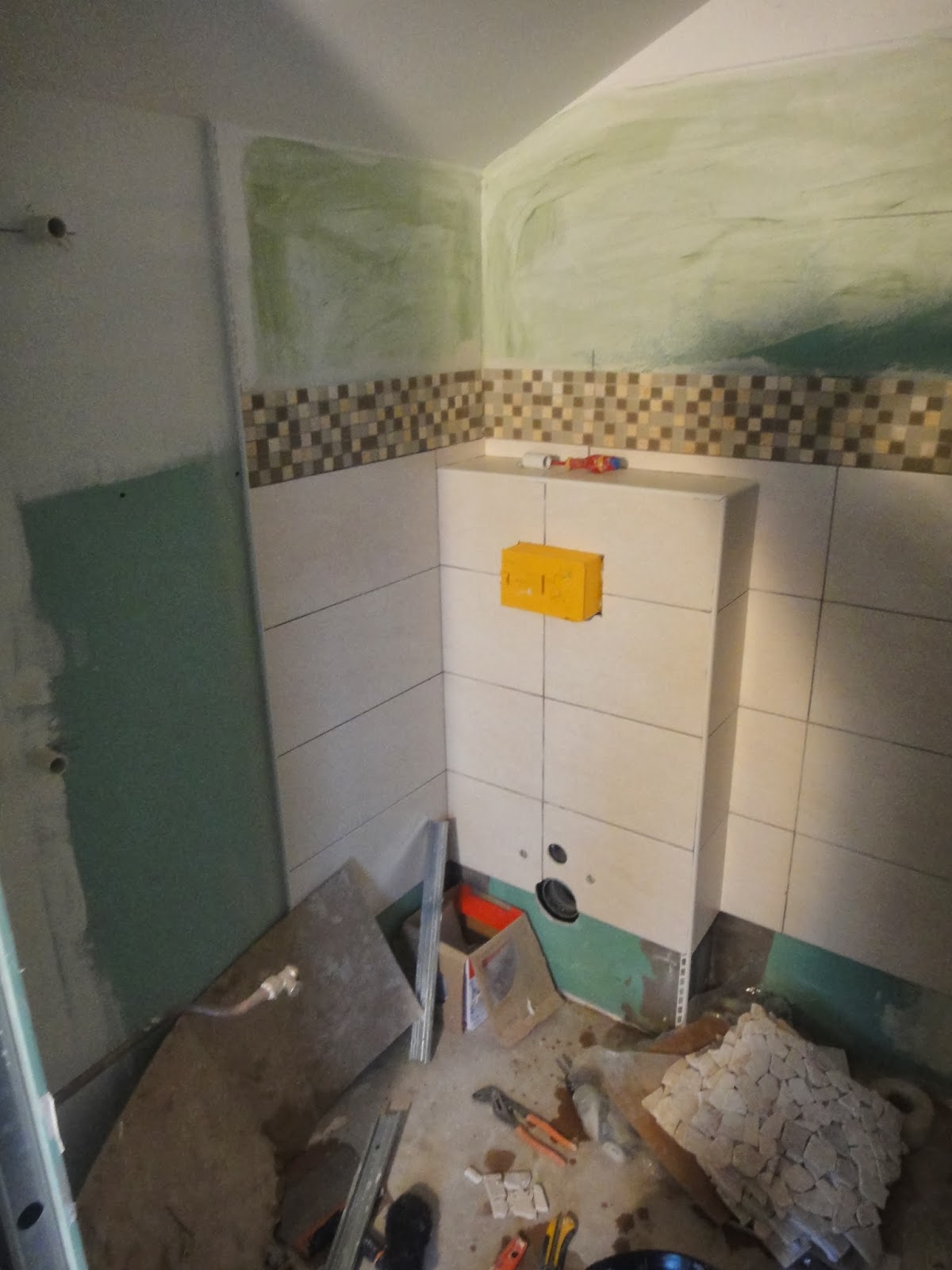 The bathroom has been taking shape nicely.
The in-wall suspended toilet turned out really great.

Apparently, they are not very common at all in the USA, as I found out when I was trying to describe the project to my mom.
Here in France it's A Thing. 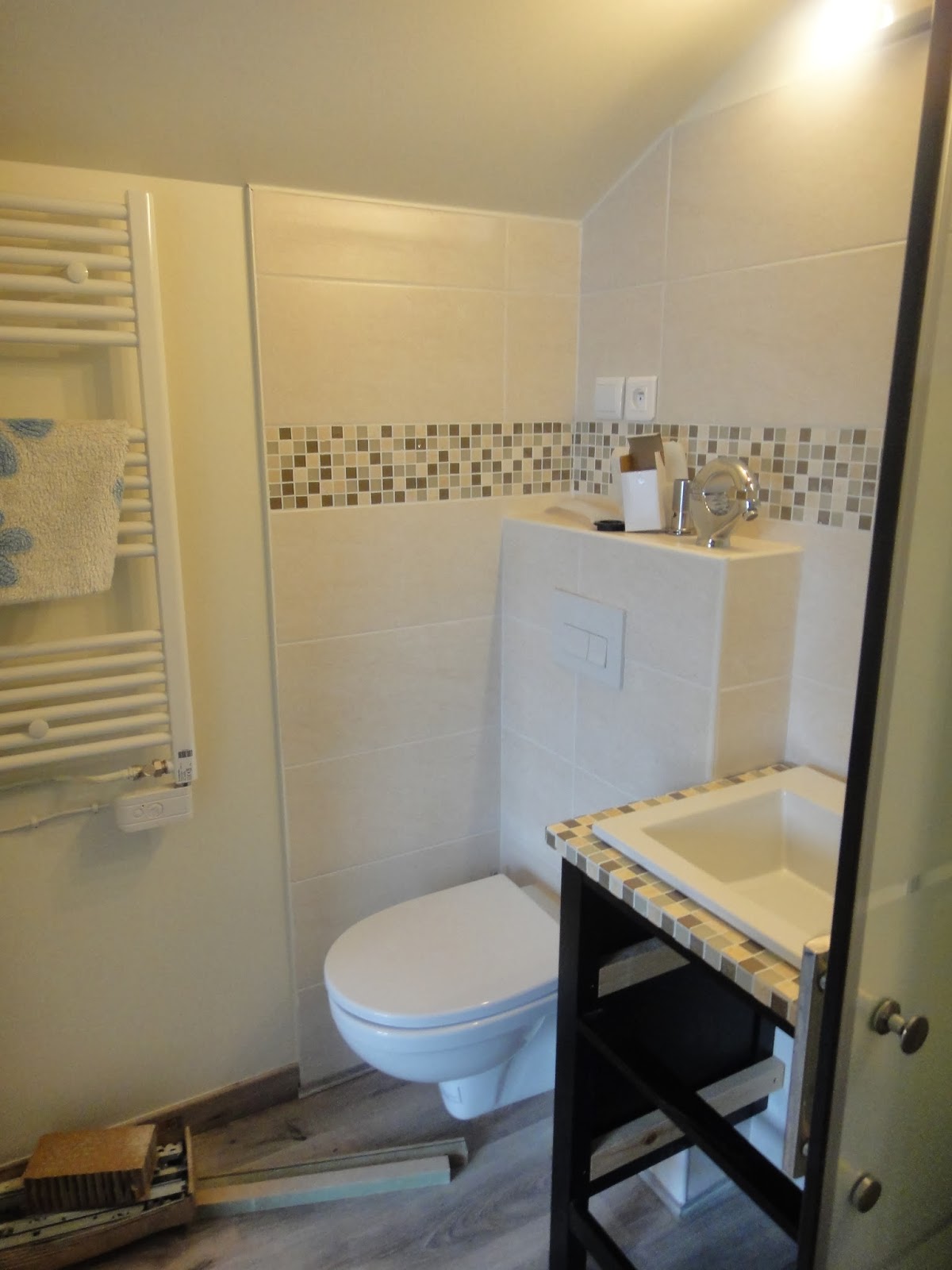 We also have the heated towel rack ...which is also totally a must-have in your bastic French bathroom.


Below is the shower.  The glass bricks are to let in light and keep it from feeling too claustrophobic. 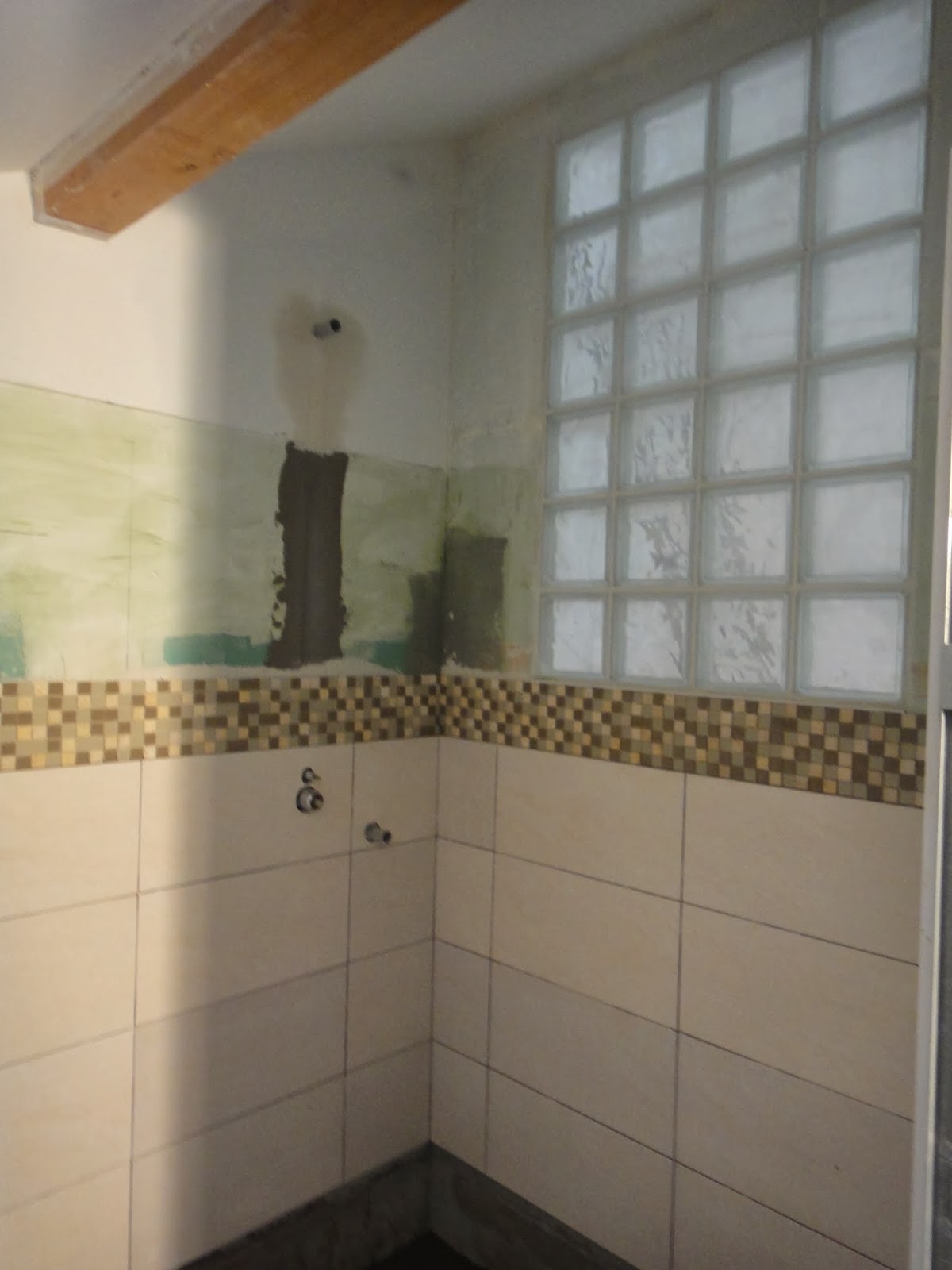 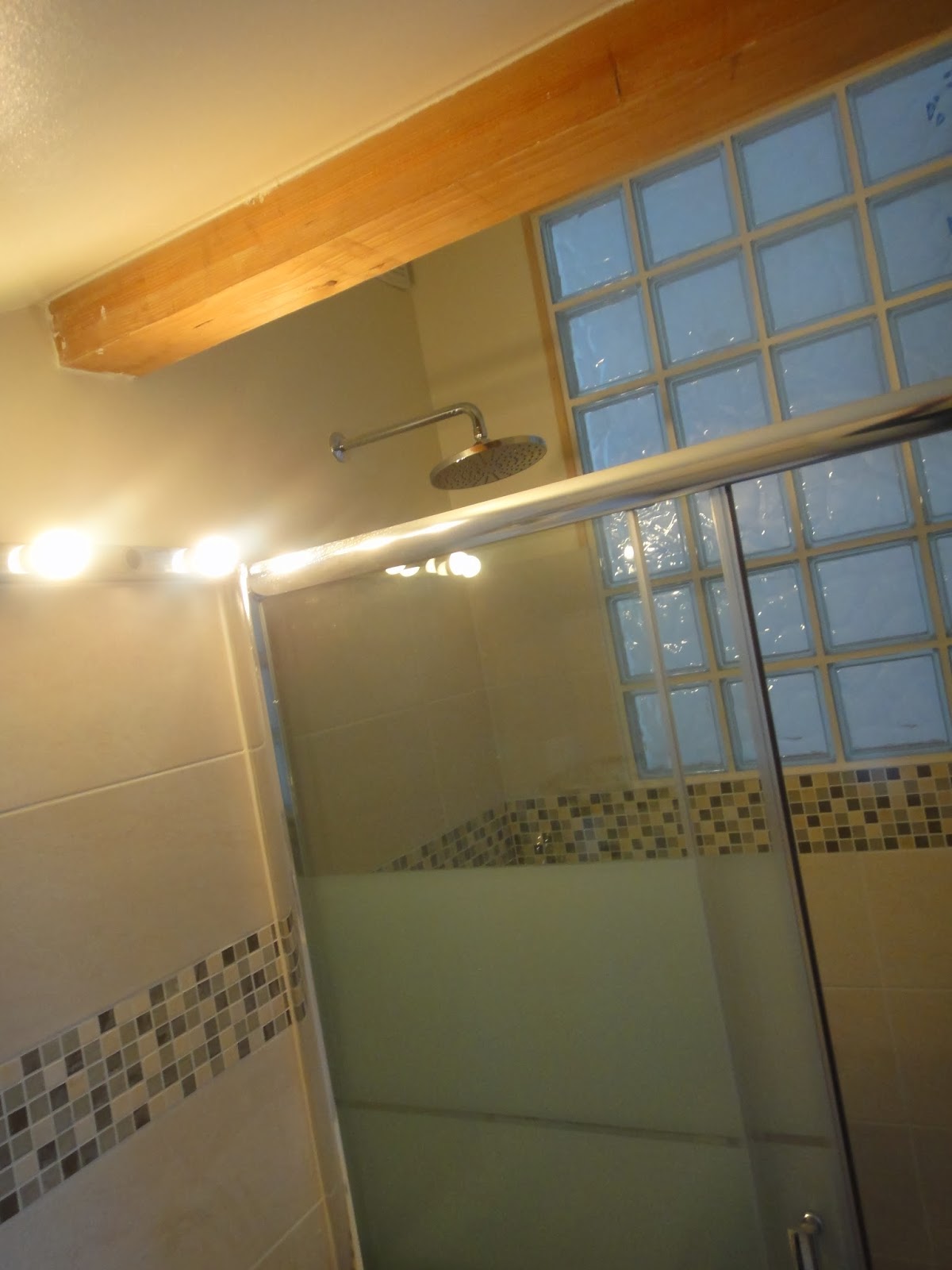 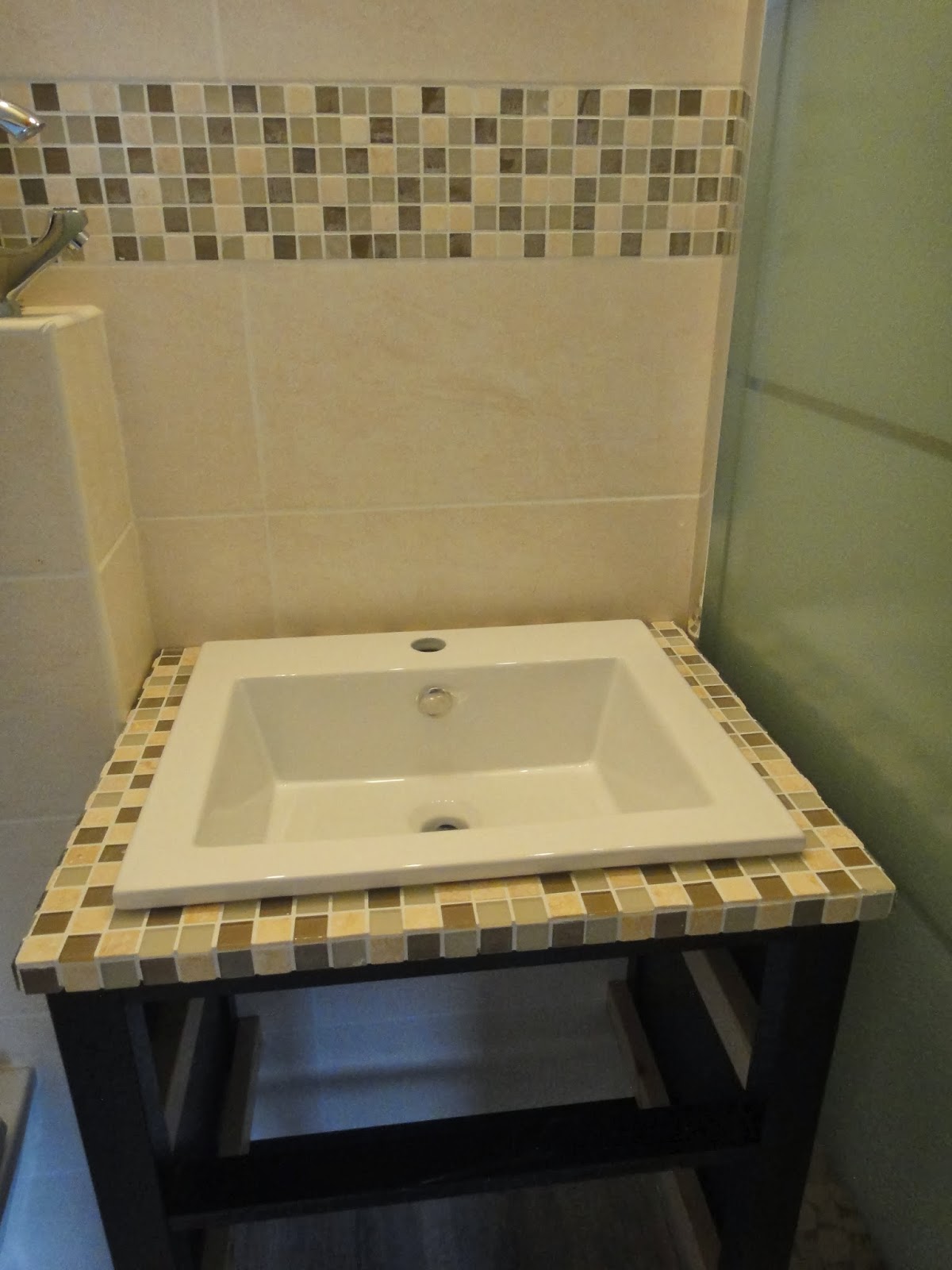 This was my brainstorm for the vanity: custom-tiled to match the wall mosaic!! I am SO happy with how it is turning out.

I also ordered a really cool faucet to go with it..... 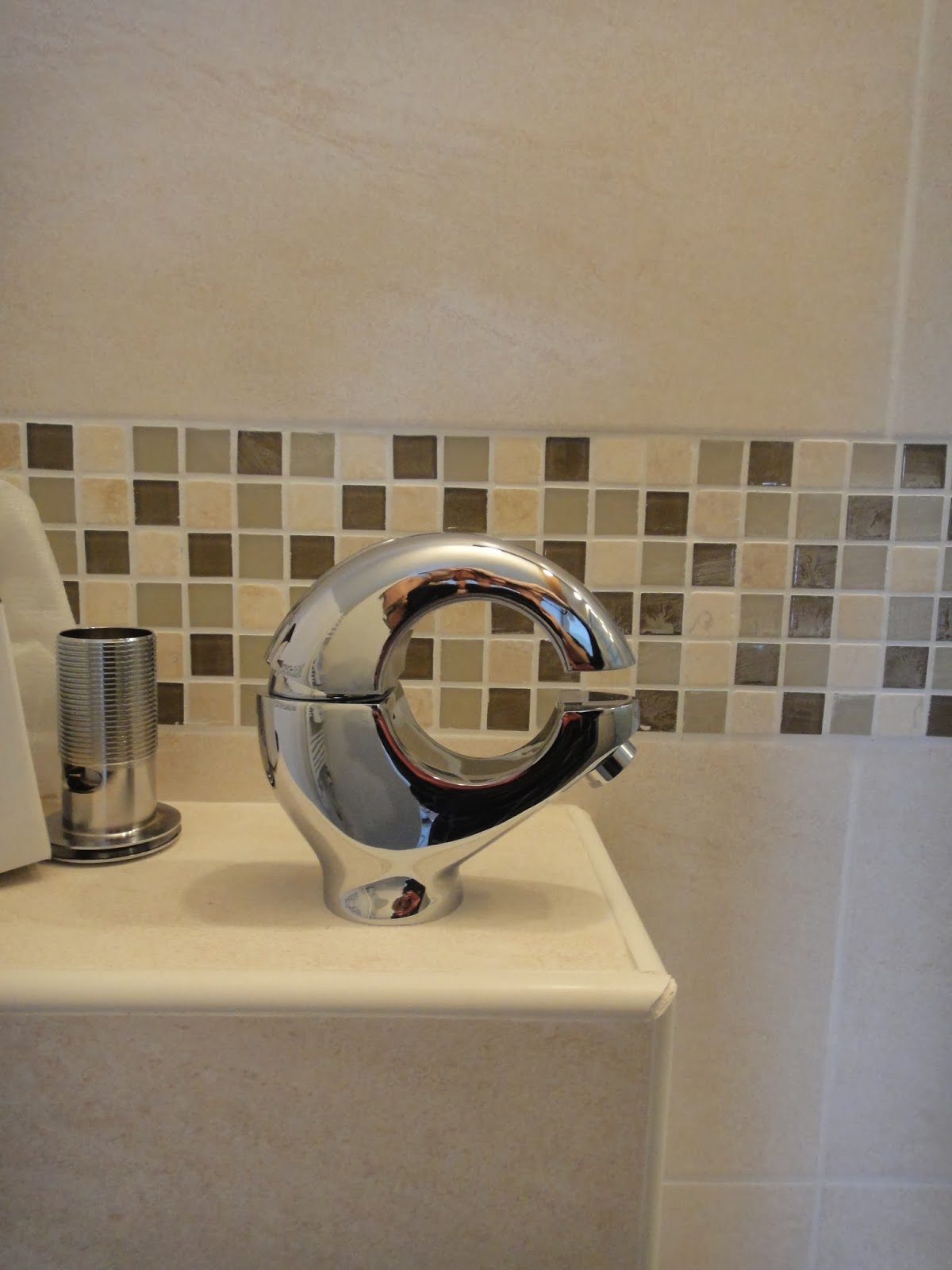 This is where it is as of today.... I think the final touches will be done tomorrow and then we will have a brand-new,  fully-functional bathroom!! 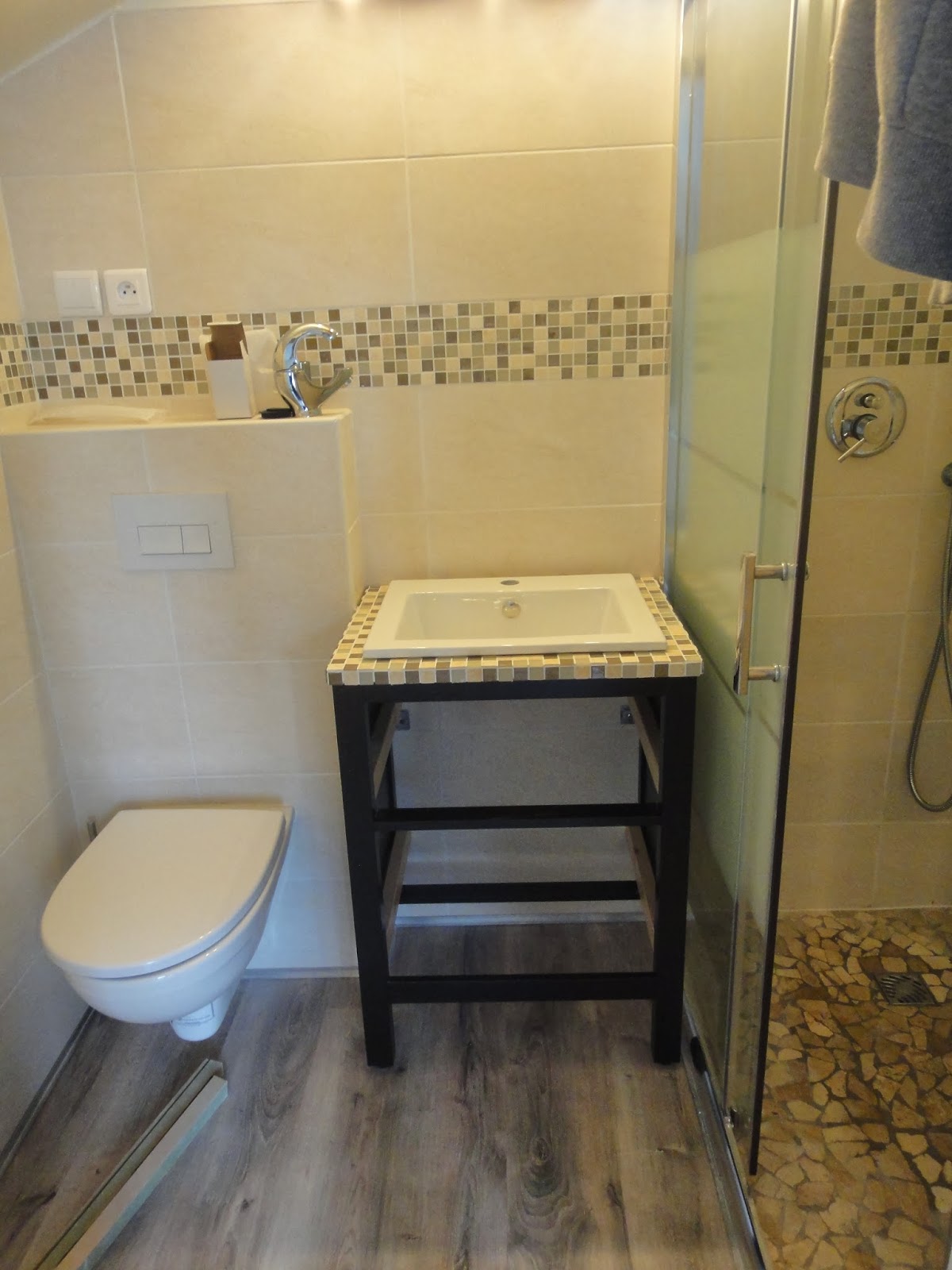 Totally Worth Waiting For (AKA Pimp My Garage)

After long silence, it has all built up to this moment:
STILL MORE HOME RENOVATIONS!!!!
And what is better than that?
Nothing- duh!

We need more room in our home in order to welcome guests more comfy-cozily (pretty sure that's not a word, but it is so much cuter than just "comfortably"). This in mind, we ("we" in this case mainly  consisting of  Paul the Roumanian Magician)  have attacked a new moumental project:
making a nice guest room with full bath in the upper story of our cavernous garage.

What used to  be a closet next the the half bath on the landing now leads to a small, empty (for now) stairwell.  The ladder there takes you to a soon-to-be-finished mini guest suit ( NB: not that it is intended only for smaller than average guests.  The "mini" refers to the fact that it is just an average-sized bedroom with a bathroom thrown in.  Non-palatial in nature.)
It is only 3/4 finished at this point, but I figured that a few "before and  partially finished" photos are in order: 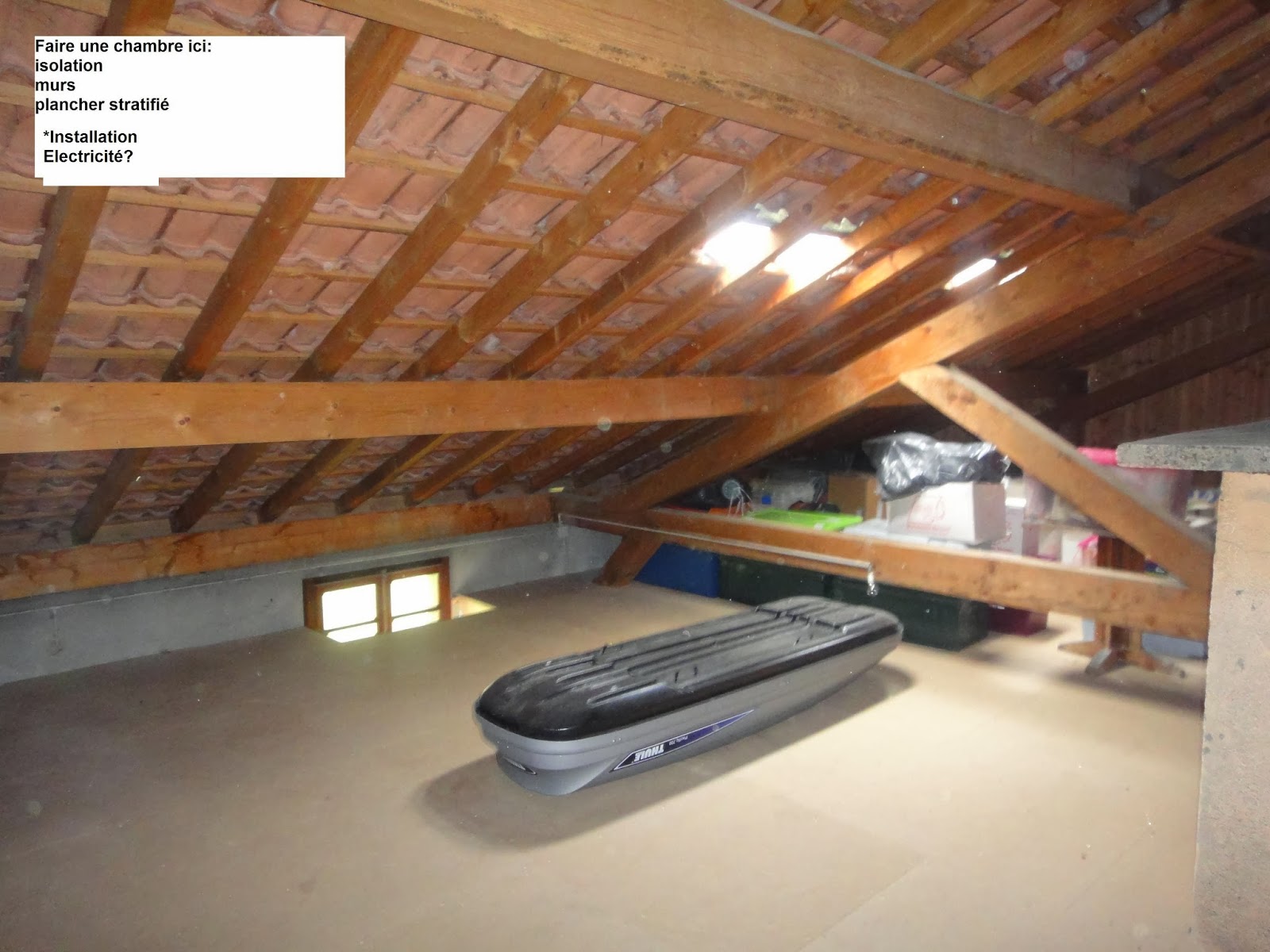 The new area only takes up half of the total upper floor of the garage.  The other half is still desperately needed for storing all of our plenteous junk.
The little cement block you see at the right edge of the picture above  is part of the closet that was later cut to provide a space for the new stairs to come up. 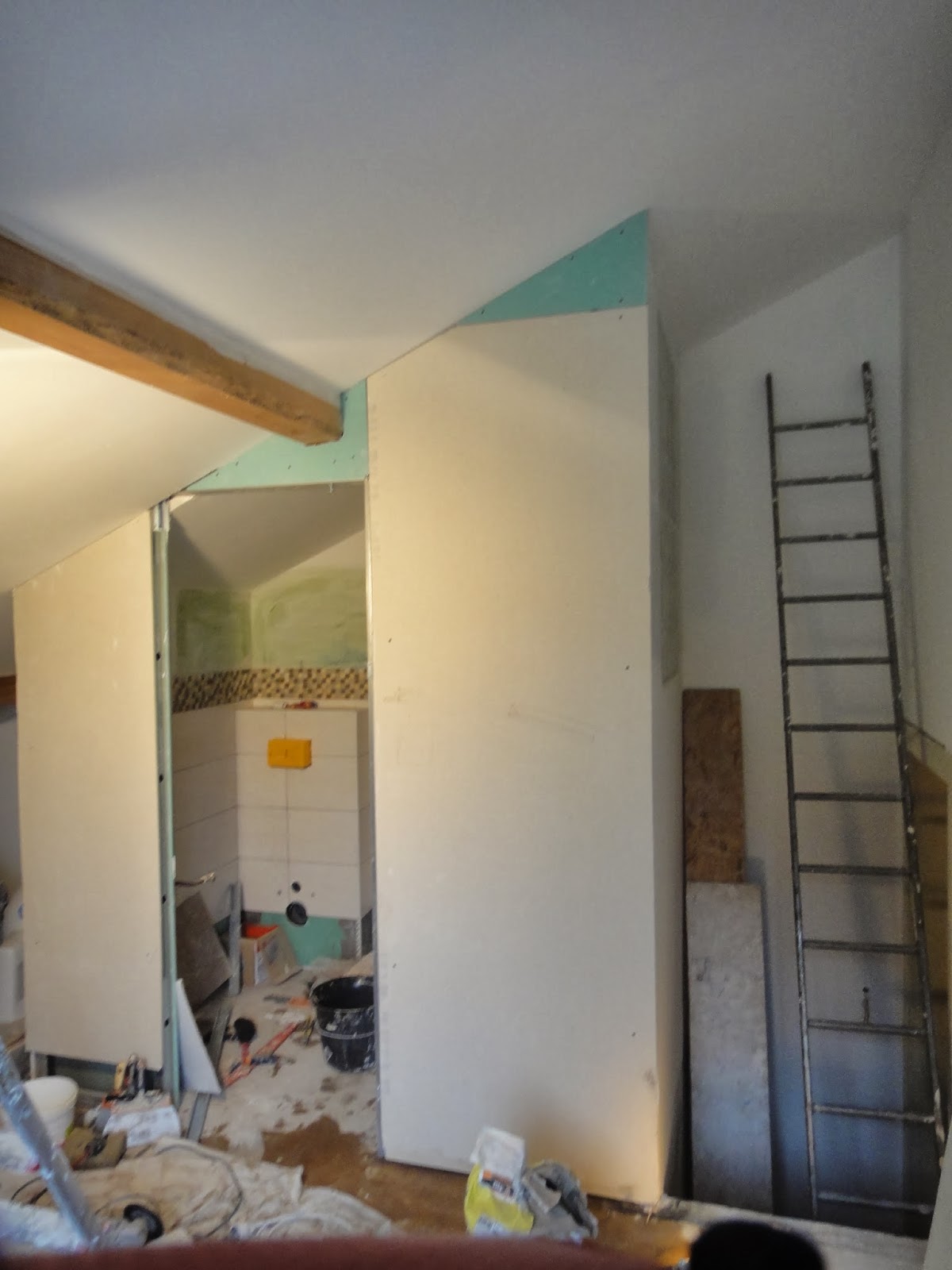 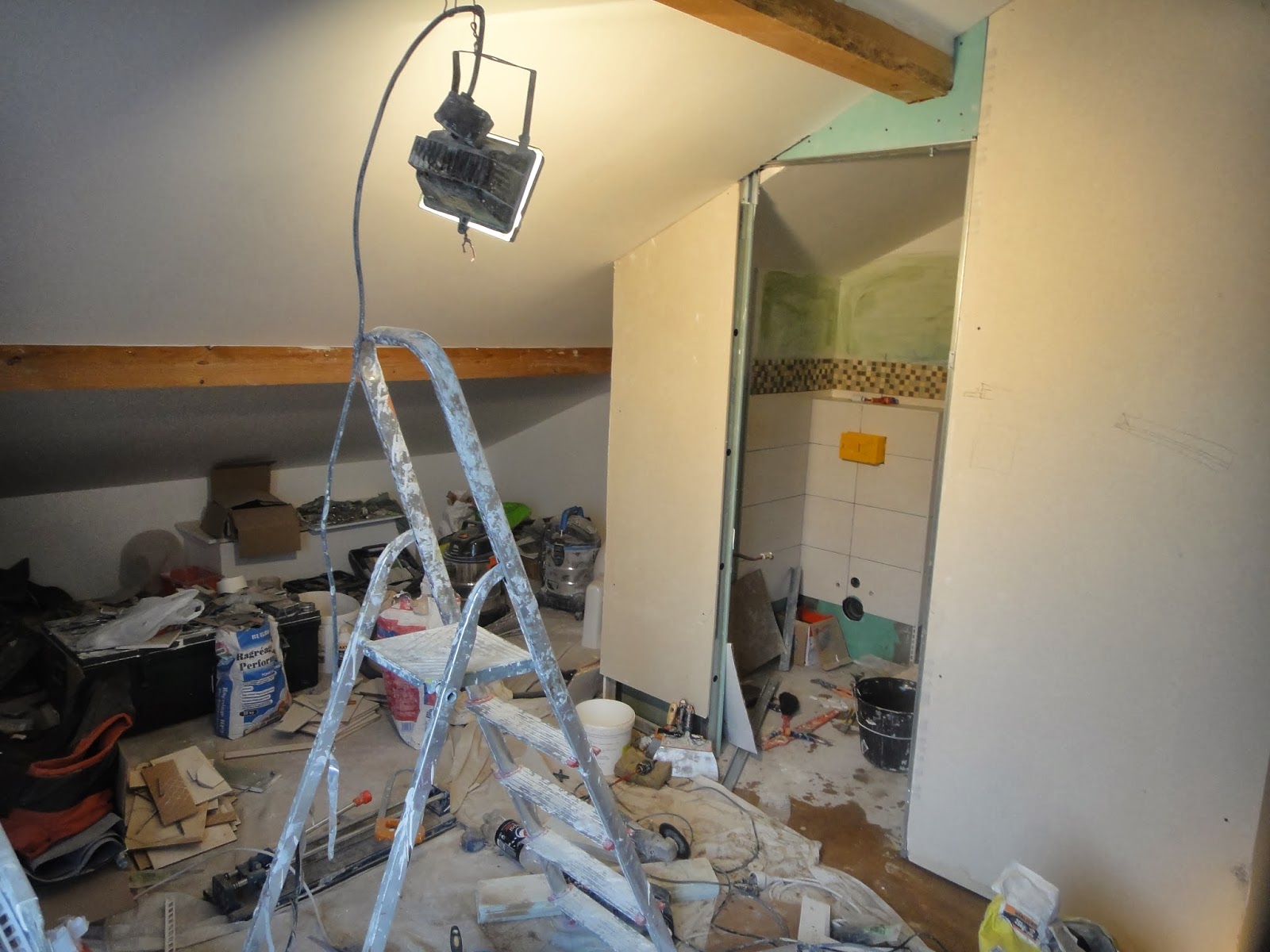 The above photo was taken at almost exactly the same spot as the one at the top. As you can see, the bathroom takes a chunk out of the space. But I think it's worth it.
In the left photo, the ladder is in the hole where the stairs will be installed. And I hope that happens soon, as the ladder is a pain. 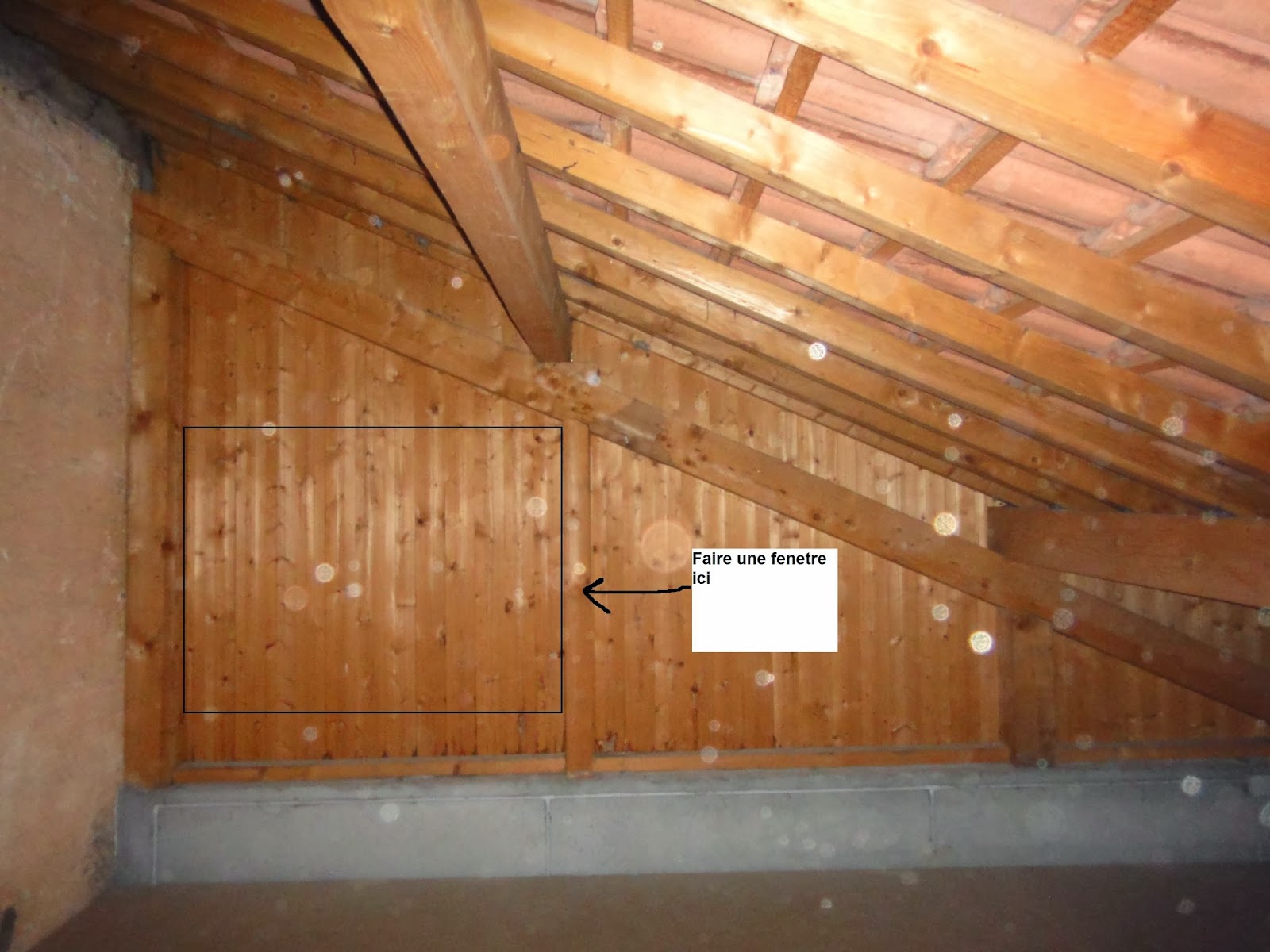 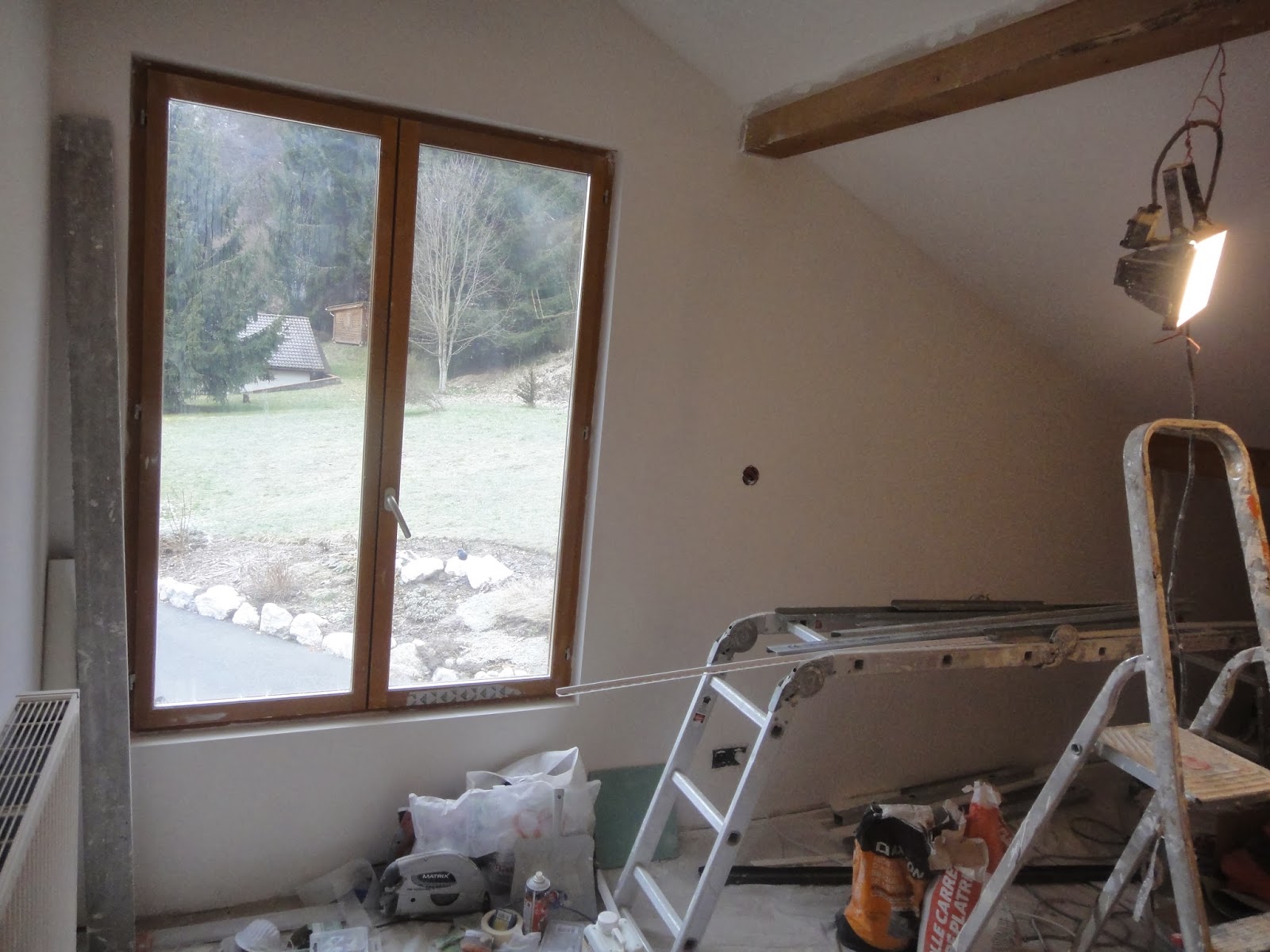 This is the exterior wall where the window went in.  It is by far the biggest window in the whole house. These old Savoyard homes were built to keep the heat in and that meant tiny baby windows.


Now we have a nice view of our backyard!

As I sorted through images to find just the right one for this post, I stumbled upon the following: 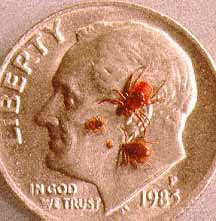 I found the image strangely heartening.
The fact that the ticks are cavorting around on top of a dime means that they are probably at least mildly interested by money, right?
So, maybe you can pay them to leave you alone?
Like bullies who take lunch money off cowering schoolyard unfortunates.
Like all those mafioso-types in films who say that it would be such a shame if something happened to your very nice place of business- such as, maybe, an intense, fuel-soaked inferno tragically burning it all to ashes. And maybe you would give a small sum to help them make sure that such a terrible thing would never come to pass.

I would certainly give ticks many, many dimes to leave me alone in the future.
One run-in with Lyme disease is all a person really needs, thanks very much.

On Thursday night, I felt a bit tired and took some Advil.
By Saturday afternoon, I was in the hospital emergency room with a fever of 104°F.

I never even saw the one that got me.  It was apparently a kamikaze ninja tick- it snuck in, bit me behind the left knee and then ran off back into the mysterious forest from whence it came.
Creepy little bastard.

I spent two nights in the hospital.  The first night wasn't too bad- I was quite delirious and hardly remember it. What I mostly recall are  vivid hallucinations about a tiny black kitten made out of crumpled paper.
There was also a turkey riding around in the back seat of my dad's pickup.

By day two I felt lots better, though weak.  But I was certainly alert enough to enjoy the amusing company of my roomate, a rather excentric old lady.  She shouted quite a bit.  And when she wasn't shouting, she was burping and farting.  It was kind of hard to decide which was worse. While she was yelling, I'd wish she'd shut up, but then when she did, what followed was no day at the park, either.
I wish to god that I was making this all up, but sadly, it is all true.

The kids came to visit me at the hospital.  They regretted that they hadn't brought a bunch of limes.  they could then scatter them across me as I lay in my hospital bed and take a photo that could be captioned in a humorous fashion:, such as:  "Poor mom has Lime disease"
The loling would have been endless, I am sure.

At any rate, I am back home now, taking antibiotics and trying to rest a bit.
And I'll be keeping  some spare change in the pocket of my robe...just in case. 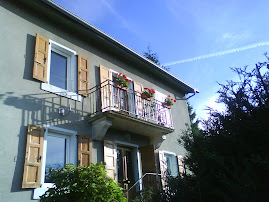